The sight of a respectable middle class town’s woman stripped to her underwear, bare footed and head uncovered,  humiliated and from time to time flogged as she processed around church and market place was meant to be an example to the population.  It was a common sight in Loddon during the years 1428-1430!

Certain town’s men and women and, on market days, others from the surrounding villages, were forced to undertake these rituals of public penance:  the price of their heresy.

However much like punishment it appeared, penance is what the Church called it!  It was harsh but preferable  to  being burnt at the stake!   The penitents, who had all appeared before William Alnwick, Bishop of Norwich were Lollards whose beliefs were more radical than those of John Wycliffe and the earlier Lollards!  They were disciples of Hugh Pye and William White preachers who had their base in Loddon.

The heresy of which they were accused, and freely admitted,  had  little or no respect for the authority of ordained ministers,  nor for the sacraments of the Church.  To the 21st Century mind Bishop William’s decisions to burn Hugh Pye and William White at the stake (in Lollards’ Pit in Norwich) and to impose harsh punishment/penance on their disciples,  is  a clear admission of the weakness of his arguments!

Burning heretics, in practice those who opposed church rulers,  had begun long before Pye and White were executed and continued for years after.  Catholics burned Protestants and Protestants, Catholics and both burned witches!  I  disagree with the Loddon Lollards  about the value of ordained ministry and the sacraments, but still revere them as martyrs for the free speech and the freedoms we enjoy today.

Of course, the argument about orders and sacraments has not gone away!  It is current still, but after the trials of 1428-1430 it went underground, where it already enjoyed a long history.  Bare footed friars, such as those who supported John Wycliffe (alongside John of Gaunt and Henry Percy)  when he was called to appear before the Bishop of London in 1377, had long challenged the opulence of prince bishops by their radical poverty.  Mother Julian, writing in Norwich a generation earlier, stressed the courtesy of Christ. This was an image at odds with that presented by Henry Despencer,  the Fighting Bishop of Norwich, whose army routed the peasants army at the Battle of North Walsham in 1381. None of this went unnoticed .

In the St.Luke’s Chapel of Norwich Cathedral there is a rare survival from the pre-Reformation Church,  an altar piece known as  Despencer Retable.  Said to be commissioned to celebrate Henry Despenser’s North Walsham victory, it shows Christ’s public humiliation and flogging, dozy soldiers and military types join in the humiliation and then totally miss the Resurrection!   No prizes for guessing where the artist’s sympathy lay.

News of John Ball’s sermon at Blackheath and his subsequent death would had travelled up the east coast from London and all the way up the Norwich river!  John Ball had been in Norwich during the time of Black Death.   People knew about him.

Like Pye and White,  John Ball was  labelled and then executed as a Lollard. The same fate awaited the leaders of the Norfolk uprising.  As Langley Abbey was among those places  attacked by the mob, it would have included folk Lodden in its ranks.   Unlike the Lollards of 1428-1430 these Lollards had little interested in religion. They simply wanted to burn the legal documents that proved they were serfs and  tied to the land.

In spite of his death, or perhaps because of it, John Ball’s sermon lives on and would have been known by those who took part in the Norfolk uprising and painted the Despenser Retable.  The coastal trade took ships and sailors up and down the east coast and its rivers and by those who painted the Despenser Retable !   John Ball’s words still echo down the ages and retain the the power to challenge and  inspire   – “When Adam delved and Eve span, who was then a gentleman.” 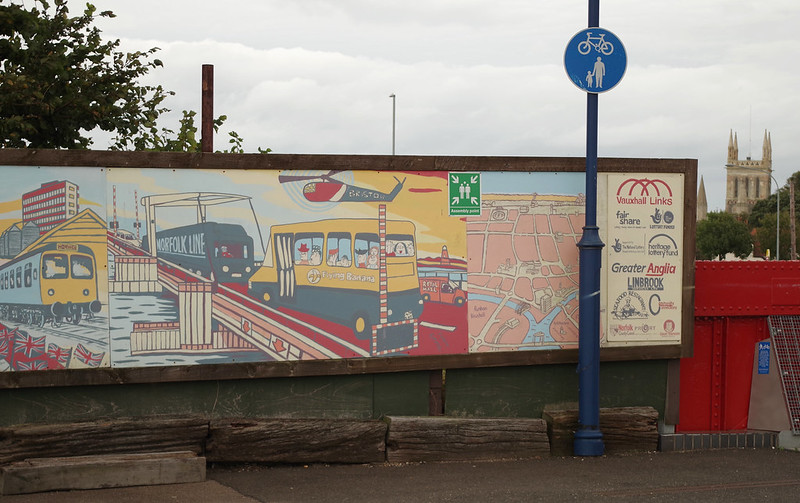 Churches in the Landscape are themselves a form of art and they contain works of art too!  Modern works , such as John Dashwood’s gritty Stations of the Cross in Great Yarmouth Minster

There are also brilliant new stained glass windows at Reedham

Reedham Flats and Marshes ! I do not recognise the church. I wonder, if the mills ring true?

I checked out his St. Benet’s this week. Again, his church in the landscape bears no resemblance to anything on the ground – neither then, nor now!

Don’t ever let nobody drag your spirits down….

Good to See in the EDP